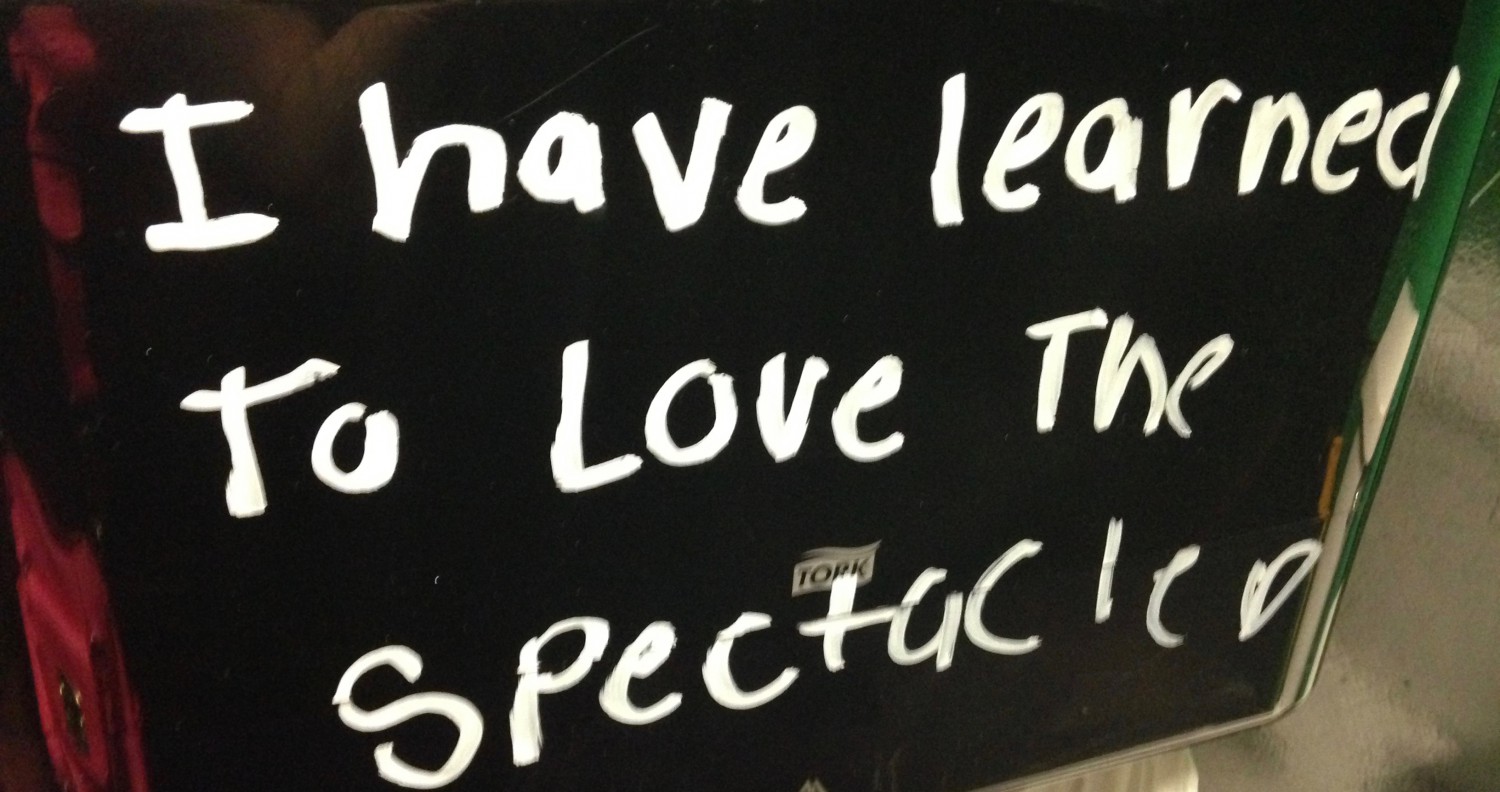 On my fascinating little journey, which actually makes a lot of sense when you consider even my childhood’s obsession with human rights (aka before I escaped the bowels of Christianity, otherwise known as evangelicalism and/or the Southern Baptist culture), I have learned a lot about what NOT to say. Being cursed with the gift of empathy in nearly any context, I have learned to listen to people’s experiences with almost no judgment (unless you’re a prospective romantic partner, in which case you’re screwed.  But we are working on that).

Given that an actual VIDEO OF A MAN BEING SHOT TO THE HEAD is not enough to convince some people that things need to change, I spent a few hours ranting and raving in my head before realizing that there is a bigger issue at hand: the inability for the world I came from to acknowledge that their rhetoric sucks.

The truth is that many of the people I grew up with, including my own brother and dad, are still throwing around words that make them sound like better friends of the Ku Klux Klan than most Christians.  But thanks to the Tea Party movement, the meaning of the phrase “most Christians” is becoming much less accurate than it used to be.  There’s a reason that Trump actually won the nomination.

So, as a public service announcement of sorts–acknowledging that I am preaching to the choir–here are a few things that I need to get off my chest.

Some people may disagree with me (duh).  Have at it.  Even so, I need to share these things.

Much like teaching, being a doctor, or being President of the United States, there are some jobs that come with extra respect.  While people love to lambast the state of education and complain about lazy teachers or what the unions do, I still receive a 99% approval rating when I share my career with others.

Some jobs hold people to a higher standard, though.  Teaching is one of them.  If I get caught drunk driving, it’s not a funny, albeit slightly embarrassing story, for the water cooler on Monday.  It’s a betrayal to the high-schoolers I speak honestly to about the dangers of underage drinking, and tell that there is a better way, and that you don’t have to get drunk to enjoy alcohol once you’re of age.

The way the majority of the country was raised (aka white people, and some minorities), policemen are viewed with extraordinary respect.  Raised as quite the good little church girl, I break into a sweat when pulled over and fight a panic attack because I know have failed and I regret anything that I did wrong.  While most people’s reactions are hopefully not as extreme, the general attitude is that police officers deserve respect and keep us safe.

Unless you’re black, or Hispanic, or other races whose experiences have taught them otherwise with nearly universal consistency.

When you are consistently arrested, convicted and imprisoned more often than any other race, you have a right to fear the police.  When you are the spouse of a person of color and watch them repeatedly receive unconscionable or at the very “least” dehumanizing treatment at the hands of the very people who are supposed to protect you, you have a right to be pissed about it. Crowing about respect that the majority of the country already gives law enforcement does not make you sound like anything but a bigot.

One very sensitive area for my new significant other is the fact that he lost two jobs in a way that he perceives is unfair.  I say “perceives” because a buddy at the place told him that the positions were “slotted” for, in one case, an African-American; and in the other, a woman.

This information may be technically true.  What is insulting about his position is the fact that he believes that their statuses as a person of color or vagina means that they were automatically less qualified for the job than he was, and only earned the position due to their gender or color.

The fact that he shared this with me is evidence of a strong ignorance about the idea of white male privilege.  While I get that we each have our own experiences, the truth is that for the majority of history, white men of class and/or land-owning status have had the majority control of the narrative.  That’s it.  They still matter, and white women matter, and Hispanic and Asian and all lives matter.

But white people were not dragged against their will to a new country and enslaved for hundreds of years.  White women are not subjected to the same kinds of sexual stereotypes that black women or Asian women or Latina women are.  Black men have to operate differently than their counterparts not raised in a system that is prejudiced against them.  And the only way that you get around this story–the only way that you ignore this truth–is to a) prize the individual to an extent that ignores every and all social reality, and history, and/or b) believe, in your heart of hearts, that black people are inferior.

Why?  Because why else would the fact that #blacklivesmatter offend you?  Why would it be such a threat to say that, after white lives have been privileged for hundreds of years, in a system that reeks of injustice–despite trying to “do the right thing” by many of its employees–black lives should be treated equally?

On a different note …

3.  “Hate the sin, love the sinner” is hurtful and ignorant.

I was raised to say this about homosexuals, and it is ridiculous.  Telling someone that their sexual identity is sinful and will send them to hell indicates its own theological problems, but more importantly, it shows a complete lack of understanding about identity.  Who we love and have sex with is a big part of how we view ourselves.  Telling someone that being gay or lesbian or bi–and acting on it, ever–is sinful is hating them individually, as people.  I know that is hard to hear for many Christians, but it is true.  Posts have been written ad nauseum about this reality, but I still had to get it out there.

I was astonished to hear many news outlets in Florida, where I live, use the term “homosexual lifestyle” when describing the PULSE nightclub shooting.  Perhaps if people like to go to nightclubs a lot and party, you could say they are engaged in a “partying lifestyle,” but homosexuality?  Not so much.  Again, to be gay, as far as I understand, is something that the vast majority of homosexual people realize early in life, around puberty, or even before that.  Equating it with someone who likes to travel or do adventure sports or read a lot reveals a lasting misconception, even in secular, popular culture.  These people did not die because they woke up one day and decided to have sex with someone of the same gender just to piss off their parents.  They died because of a systemic enculturation in which their very personhood was called into question, degraded, demoralized, and labeled as aberrant.  Whether Muslim, Christian or even just American, until recently (speaking in broader terms of history), the LGBTI community has been marginalized and treated with disrespect.  It is not a life someone chooses like they choose to enjoy fine wine.

That’s all I have for now.  There is a lot more to be said, and there are a number of greater points to be made, but for God’s sake–at least Christians–stop using these phrases, and start actually engaging with reality as it is, and not as you would have it be.